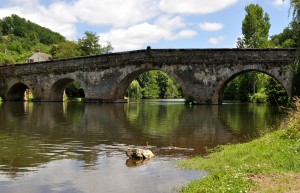 Over centuries, men have tried to tame water, rivers, with more or less success… Nowadays, bridges which cross over the Segala Tarnais tell a story if not stories…

Once upon time, there were roman bridges, footbridges, a viaduct!

Discover the story of a ghost bridge : the Devil’s bridge, at Jouqueviel. The existence of this bridge is, most likely the oldest one in the Viaur Valley, just as mysterious as its name! To explain this last one, legends are not missing…The unique arch evoke a roman technique and suppose its construction in XIIth century.

Footbridges here and there, you will cross some! The toponym “planca” which means footbridge in Occitan, is attested since the XIth century. Footbridges well show that for a long time, men were crossing rivers to go from one bank to the other. One of the biggest example is the one of Las Planques, rebuilt under the Revolution.

In Monestiés, you will be able to cross the bridge of Candèze, built in XIIth century, on the roman route Rodez-Toulouse. This humpbacked bridge, with its three arches and its surprising piers’ reinforcement, withstanded time, mainly to Cérou’s numerous floods. This bridge has been trampled by a myriad of pilgrims who were going to Santiago de Compostela; Monestiés being, in the Middle Ages, one of the halts on this peregrination route.

Reuniting both banks, Aveyron and Tarn, Viaur’s railway viaduct is one of the XIXth century’s wonders of metallic constructions, with its more famous counterpart, Garabit’s viaduct. In 1873, the construction of a railway between Carmaux and Rodez is decided. The viaduct allowed for huge influx of lime, fertilizers, agricultural machinery, in this land of Ségala, mostly on the strongly landlocked Aveyron’s side.