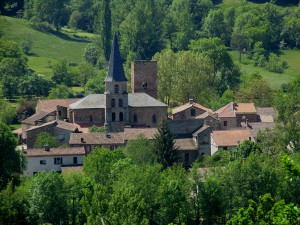 Following the Cérou, you will arrive to Salles. Between Monestiés and Cordes sur Ciel, take a rest and be charmed by this picturesque medieval village with its red sandstone houses, and its medieval towers.

Salles has been the theatre of crusader’s disorders between Albigenses. The remains of fortifications, like the square dungeon and stronghold houses, can attest to this.

St Sauveur’s church, of which the existence is mentioned in 972, is distinguishable by its four virtues statues : Hope, Care, Strength and Justice. Salles’ village is also known for its stone, that was extracted in the area in the 50th.

A discovery tour on the Crusader against Albigenses’ theme starts from the centre of the village. The knight Imbert de Salles, who won fame during The Crusade, will be your guide all along the way.