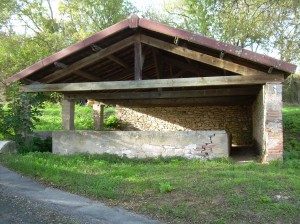 What if we were going back to the time of washerwomen? Let’s meet like them at washhouses, but not to rinse your clothes, rather to see how they were doing. They are, too, witnesses of local history.

On the Ségala Tarnais territory, two washhouses have been subjected to restoration; Mailhoc’s and Saint-Sernin-les-Mailhoc’s ones. Nested in a small valley, at the foot of Mailhoc’s village, Saint-Eloi’s washhouse has been restored. We know that originally there was no covering and that washerwomen knelt directly on the ground to soak the laundry and that the trough was built after that. Powered by Saint-Eloi’s spring “that will never dries up”, the washhouse is composed of three basins.

The washhouses’ track offers you a glimpse of these hidden treasures.